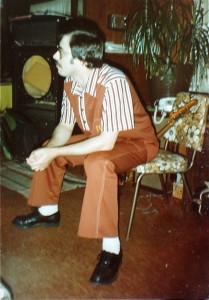 My brother, DD, is an enigma.

I’m also pretty sure he’s a democrat. Or a republican. Or something. He’s quite a bit of awesomeness wrapped in a dark-haired package.

Ok – silvering-dark-haired. One of the first things he noticed about me the other day is that my hair is thinning. Give me a break – you started first, bucko.

(And for the record, I thought for .0003 seconds or so about referring to him as “Double D,” and instantly rejected that. You’re welcome – I care about all 3.78 of my readers.

Anyway, DD is pretty much my opposite. Not because I’m opposed to everything he represents, and so I vowed to live my life in direct defiance of him, his ideals, and his taste in clothes. Which I don’t, to set the record straight. Nope. Not that.

But in many things, yup. That other that. Or thats.

For example, we look nothing alike – you’d see us sitting together, and you’d have no clue that we’re related, let alone brothers. This was even more profound when I weighed many hundreds of pounds – you’d see one fat and one skinny, and that’d be another evidence of opposite. His coloring is more like my grandmother and aunt – brown eyes, darker complexion, black hair. I lean more towards my Norwegian heritage – light hair, blue eyes, and fair skin that requires sun block factor 5000 or something.

But I let my emotions show more. (“Let” being a relative term – I’ve never ever had the control or inclination to hold them in check. “Maybe I’m just like my father – he’s never satisfied.” I don’t know what that means… maybe “this is what it sounds like when doves cry…”)

(Thank ya. Thank ya very muchhh…)

I’m not self-reliant, I’m not self-contained, and very much NOT self-assured. I struggle, I flounder, I cry, I moan, and I hang it right out there for the whole world to see.

(There’s a goodie for those of you who didn’t get the “Artist Sort Of Known At One Time As Prince” reference above. When in doubt, go with the classics.)

My brother is a VERY talented musician, more so than myself in many ways. In his day, at the top of his form, hearing him play the clarinet was glorious. It still is, for the record. And sax – he plays my old sax far better than I ever did.

I don’t know that I ever told him that. One of many things I’ve failed to do in our relationship…

And although he’ll credit me with setting his feet on the path, he is a more excellent bass player than I.

(My good friend Double G would throw in here, saying, “Not better – different. You’re both excellent.” Thanks, friend – I appreciate it.)

What DD has that I lack, in huge quantity, is discipline. When he commits to doing something, he does it with all his attention, his drive, his skill. When he puts his hand to the plow (to use the Biblical reference), he doesn’t look back. He commits.

In music, to continue that thread, he uses his drive and discipline to make himself excellent. He plays with his heart and it comes out with great skill. I lean on my huge natural gifts, play with my heart, and it comes out sloppy and heartfelt.

Let’s just say I get away with a lot.

He doesn’t play as many different instruments as I do, but every one he plays, he plays well. He PLAYS them, I play AT them.

Watch the two of us play bass – DD’s left hand (fretting hand) stays in place, playing in position, not needing to flail all over the place while he nails the groove down to the floor and keeps it there with sheer awesomeness.

You’ll see my left hand chase up and down the fretboard (ok – fretlessboard, since that’s how I roll), following my ear and imagination with little technique, doing the musical equivalent of painting myself into a corner again and again. The main reason I play a six-string bass? Get more options under my fingers so I don’t get totally kerfluffled* quite so often. A cat dancing on the limb of a tree, saying “How the heck did I get up HERE?” That’s me. Totally.

My brother is a better bass player than I am. That’s my story, and I’m sticking to it. Yup.

He’s not perfect. He’s had to chase his demons, just as I’ve had to chase mine. We’re broken people in need of redemption, and he’d be as quick to admit that as I am.

He’d just do it quietly. I shout it from the trees.

I’ll admit I’m not good at relating to him. First of all, I totally rot at one-on-one interaction, unless I know the other person very well and feel totally safe and comfortable. Then you can’t shut me up. I go from quiet and withdrawn to boisterous and blabby.

(Which, in bipolar terms, is swinging from depressive or withdrawn, to mania, or chatty and bubbly. I have a pretty short cycle, so I can run from one to the other quickly. But either extreme is not necessarily a good thing. I’m working on finding the middle ground when hanging out one-on-one, but it’s a work in process.)

Then, I have trouble relating to men one-on-one. Since I grew up with a huge lack of male role models, I’ve not had examples to pattern myself on. And I have no interest in “guy stuff” – sports, outdoor activities, blowing things up, cars, beer, etc. I was raised in a matriarchy – I know more about cooking, sewing, and crochet than I do football. And I’ve been quiet witness to what the ladies talk about when the men move to the living room to watch the game.

No male personage should ever have to endure that. *shudder*

So hanging out with my brother, my opposite, is difficult. And yet, we love each other. And I admire him. In so many ways, I wish I was like him.

He’s walked a hard, hard broken road. He’s been faced with physical and mental challenges that would have had me flat on the ground whimpering. And yet he keeps moving – no stopping, no sitting immobile pondering the injustice of this world and how he feels about it, no moaning about how he got the short end of the stick and it’s not fair. He moves along. He makes due with what he has (which is next to nothing), he lives with the challenges (which are huge), and he keeps moving.

Did I mention he’s my opposite?

When our mom died, we separated. Not out of disagreement, not a feud or a parting of the ways with all the related drama. We simply went to our separate corners to lick our wounds, grieve, and heal.

And to chase our demons.

My path took me to brokenness, to losing a job I loved way too much, to quiet insanity for a few months, to shouting at the sky and crying out to God and hearing nothing but silence in return.

Ok, quite a while.

Then, as always happens but never in the same way twice, the road led to restoration. And life. After taking away everything I thought was mine, after reducing who I thought I was to rubble, God began building something new.

And now, after three years, my path is leading me back to connection with my brother. My brokenness has given me a sympathy for his that I’ve never had before. My selfish and condescending attitude has (for the most part –  I’m still a broken critter…) gone down the biffy, and my heart breaks for him.

And this time, instead of seeing all those qualities in him that I find so lacking in me, I’m trying to learn the lessons that he’ll teach me. And in return, trying to show him the love and bond that should have been plain all along, the reaching out that I simply wasn’t capable of with my arms full of all the baggage I was carrying.

There are things he shows me, not by word, but by deed:

He shows me what it looks like to not be controlled by your emotions. Does he get angry? Does he get sad, frustrated, disappointed, lonely, defeated, or discouraged?

Of course. He’s a broken person, just like we all are. He chases his demons one foot after the other, just like we all do. But in the chasing, he maintains his center. He doesn’t waste energy spilling his guts all over the ground – he applies what he has to moving forward, instead of stopping to vent, decompress, and yell. I’m sure that stuff comes out someplace – everybody needs someplace to unload – but wherever that place is, very few (if any) ever see it.

He shows me that regardless of the challenges, the stresses, the problems or the tough stuff facing you, don’t stop moving. You don’t get the luxury of just sitting beside the road, pondering what it all means and trying to put it together before continuing the journey. If you stop, you lose momentum, the problems become worse, and you’ll put down roots so deep that you’ll never escape.

By stopping to think about the issues, they’ll choke you. You can work through them, you can scream and cry and wonder how you’ll ever pass through them or be led through them, but your feet have to keep moving lest the things that seem insurmountable actually become your tomb.

He shows me that in the middle of mind-numbing challenges, you never stop listening, you never stop reaching out. Others are struggling too, so instead of fixating on how hard your life is, reach out and help where you can, and in doing that, you keep moving.

He shows me that there is no obstacle, physical or mental, that keeps you from making some progress. It makes for difficult, painful progress, but not moving only gives the pain a chance to be prolonged.

The physical challenges he has to endure would have killed me years ago. Not challenges of his own making, but the things that he has no control over. Believe me – I’ve had a few tiny glimpses of his world, and I can’t imagine how he keeps going. I’ve been through a few things, but they are nowhere near the path he has to walk every day.

And yet, he walks. He moves. He ponders things, but they don’t paralyze him. He goes on.

He finds time to think through his day. But he doesn’t make that process all he gets done – he moves on.

And he makes time to show gratitude each day. In the face of it all, he still finds a place for thanksgiving.

And yet, our paths seem to be closer. Intersecting here and there, perhaps running alongside each other for a time. I don’t know that they’ll meld into one, but being close to each other is enough.

Instead of looking at all he is, and lamenting over my own shortcomings and issues, wishing I possessed those qualities I admire in him, I’m getting closer to seeing him as an inspiration, an incentive to move. To quit pondering and get something, anything, done.

To think, to write, to work through things,

Thank you, bro. I haven’t told you nearly enough how much I love you. So I am. There. Just now.

Did that come out right? Ah well. Like I said – I don’t do languages. Even English sometimes.