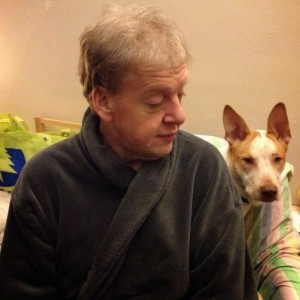 I pause to allow you, dear reader, to be a tiny bit envious. I don’t blame you at all – Honestly, I do an internal happy dance every time I get to use the phrase, “I work at the airport.”

See? There I go again.

As someone who really does get geeked at the opportunity to hang around an airport, there are a number of sights that I don’t think I’ll ever grow tired of…

— The glow of lights on the landing field – since I work nights, I get to see them every time I arrive.

— Lights in the control tower as I walk toward the terminal. Again, I get to see them every night.

(I’d really really REALLY love to get into the tower sometime, but I don’t think that’ll ever happen – I don’t even think the “I’m a newbie and got lost” excuse would work, let alone the “What do you mean this isn’t the bathroom”? excuse. Either of those would probably lead to me getting an ever-so polite talking to by the fine and friendly folks in the blue uniforms with the shiny badges…

Ain’t nobody got time for that.)

Back to the sights I see…

— Looking at planes going up, coming down, and parking at the gates.

(Did I mention that I get geeked about being at airports? I did? Good…)

(I’m going to ask my boss if there’s any chance I could also train to work on the ramp – I want to be one of the cool kids in the reflective vests with the magic glow sticks of authority that have the power to steer a big ol’ plane nose onto a little mark on the concrete.

That’d be fun. Also might induce slight moisture in one’s neither regions – this would, after all, be a big ol’ plane nose, heading STRAIGHT FOR YOU.

But with great power comes great responsibility – no making the plane do donuts or something just to see if the crew would actually do it. Bad Calbert. Very VERY bad Calbert.

Besides, I think the pilots would just run my sorry hiney over, and rightfully so.)

(Did I mention that I get geeked about being at airports? I did? Oops – my bad.)

One more sight at the airport that I don’t think I’ll ever get tired of: Watching people. Watching passengers as they disembark – sure. Although at the hours I work, the look on their faces is usually something like, “FINALLY!!” It’s still worth watching, but let’s face it – by the time they pass by little ol’ me, they’re rung out and ready for their jammies.

But the folks I especially like to watch are the people who are waiting for someone to arrive. It’s always changing, from men and women waiting to catch sight of their beloved coming around the curve of the exit, to groups of folks waiting for someone to return from far away. Sometimes they’re a bit wrung out too, having been shoved into extra innings when the plane they’re waiting for gets delayed for an hour… or two…

That all seems to melt away though, when whoever they’re waiting for comes around the bend and into their line of sight.

They hold signs, they bring flowers, or they greet their loved one with the biggest hug imaginable. Children run to mom or dad, families wrap their arms around grandparents, and friends have long looks into each other’s eyes as they measure the time since they last saw each other.

And I ponder this:

When I’m apart from those I love, even for a short time, am I as overjoyed to see them as someone waiting for a passenger?

I often say, and yea verily I still say, that my beloved’s smile lights up the room for me.

Do I remember to tell her that?

Or do I let the ho-hum routine of each day take that away from me? Do I fail to bask in the brightness of that smile, because the daily grind has ground me down?

Too often, all that passes between us when I see her is a simple “Hi.” Then a “Hi” back. We get in the car, we drive home. We carry our stuff in from the car, the way we do almost every single day. We may chat a little, or talk about something we need to do. I might chatter about my day, or she might chatter about hers.

But, if I’m honest, far too often we don’t reconnect – not like folks waiting at the airport. And I think I lose something along the way because I don’t make the effort to show her my absolute joy at being with her once again.

So, am I the only one who might get ground down with the daily routine like this?

I didn’t think so – we all miss so many opportunities to reconnect.

There’s another example of reconnecting in our own home – our beloved BekaV. And she never, ever gets bogged down in the daily grind. She doesn’t even know what a “grind” is – all she knows is that she’s a dog and she’s totally geeked to be one.

(Did I mention that I get geeked about being at airports? Twice? Only twice? You got off easy…)

Every time we’ve been away and she’s been in her pen, (It doesn’t matter if it was an hour or all day…) she has her little ritual of reconnection… She comes out of the pen, usually to me first, and ducks her head, rubbing it along my legs, pressing into me with those ridonkulously strong legs hard enough to knock me over if I’m not careful. She wants me to touch her, to hug her and pet her.

Then she runs to my beloved for the same treatment.

Then back to me.

Then back to her.

Then back to me where I mention that she should go outside with momma, and she finally runs full-tilt to the door, where momma has been patiently waiting.

Now, if she didn’t get enough affection, she’ll sometimes run back to me for one more cuddle, and then I’ll get her going toward the door. She finally goes out, and the ritual is completed.

When she comes back in, she’s not quite done with me. She’ll run in, come find me, and do more head ducking until she’s satisfied.

So, let me add to my ponderable thingie:

When I’m apart from those I love, even for a short time, I should be as overjoyed to see them as someone waiting for a passenger coming in after a long flight.

OR as a certain fur-clad cuddleball, wanting to duck her head, get some lovin’ and try to knock me over with her powerful legs.

So, the next time I’ve been away from my beloved, I’ll run up to her, bump my head into her knees, and almost knock her over with my (not-so) powerful legs.

Wait – something about that doesn’t seem right…