Kevin, the super friendly manager at Frenz on Plainfield, is trying something new for the summer… he’s having a morning storytime on Wednesdays at 10:30am, starting June 13th.

As you can see by the list of upcoming shows to the right, this Friday I’ll be playing at Frenz Coffeehouse in Grand Rapids. I’m looking forward to it – it’ll be my first time there, and I’ve heard a LOT of good things about this venue.

So, if you’re able, come and join us! I’ll be playing at 7pm, for a couple of sets, doing some tunes from my CD, as well as other relaxing music. And, I guarantee that if you bring a friend, you’ll be able to enjoy the music AND have a conversation at the same time! 😀 We’ll have CDs available, as well as handmade jewelry. (and yes, this time we WILL have the jewelry… someone came to my appearance at Beanabox especially to see the jewelry, and we didn’t have it! SORRY! :-/ Jewelry will be in da house on Friday!)

If you can make it, the support would be appreciated. Sometimes, management will use attendance as a factor in inviting someone back, so if people show up, that really helps! 😀

Yesterday was the first time since being a semi-full-time musician that I had double-booked (as in, two playing gigs, back-to-back). Oi… The problem was, I booked them too close together, and the first one started 20 minutes later than I was told on the phone.

Gig 1 – Third Reformed church. Nice time with their seniors, and they appreciated the music very much. But, as mentioned, it started 20 minutes later than I expected. So, before I played, an emergency txt was sent to my road crew, calling in some help. Thanks to Dan Da Man for allowing Vicki to skip out for a bit to come to the aid of the rotund whistler… Vicki came in, cut the tear-down time in half, and we were on to…

Gig 2 – Beacon Hill Open House. My friend Brian is the director of marketing for Beacon Hill, and asked me to play at their open house. Got here at 3pm, had to play at 4pm. But, having called in the big guns, Vicki and I had it set up in time. TONS of people, and a good event. Applause catered the event, and I was very impressed with them – they did an amazing job!

Two funny things… one couple came in, and said “we hoped to see you again, but we didn’t think it would be this soon!” They had been at lunch at Third Reformed, and here we were again. 😀 And, one of the folks from Applause came over while I was playing, and said “I wanted to take a look at your rings.” Later, she talked to me about them, and will be contacting me to make her a ring. 😀

POSTLUDE: Took me about 90 minutes to tear down, load the van, and get home. I was exhausted. So, the lessons learned from my double-gig day? 1) There has to be more than an hour between gigs, or else I can’t do it myself. 2) I have GOT to get back to work on my weight. When I was 366 and falling, I could have done this. At 425 currently, it almost kills me. The weight is the biggest issue in pursuing this creative vocation. I simply don’t have the stamina to move all my equipment, perform, and get it all home. Not to mention the day to day operation of a 3 part business. Don’t know how I can turn this around, but it needs to happen.

So, my friends, your prayers are appreciated. This is obviously a good path for me, and I’m glad the Lord put me on it, but my physical condition is making it nigh unto impossible to keep up. I’m in the process of getting insurance approval for bariatric surgery – I had hoped to do this all on my own, but I know I can’t. But the surgery is risky, and I’m a little scared of it.

For those of you who are looking for plants for spring, or just like wandering through nurserys, have I got a deal for you!!! I’ll be playing this Saturday at Knapp Valley Gardens, 4100 Knapp St NE (just a mile east of the Beltline) off and on from 10am to 4pm. They’re having a “Spring In The Valley” open house, including music, food, things for kids, and other fun. I’ll have CDs and jewelry available for sale, and would love to see you! So, c’mon out!!! 😀

It was my first experience playing a coffeehouse, and it was a good one. Not a lot of folks there, but it was a good place to “get my feet wet.” 😀 Thanks to all who stopped by, as well as to those who couldn’t make it and sent a note.

I learned a bit, and I think I’m going to get some demos out to other places and see what comes of it. Wheee! 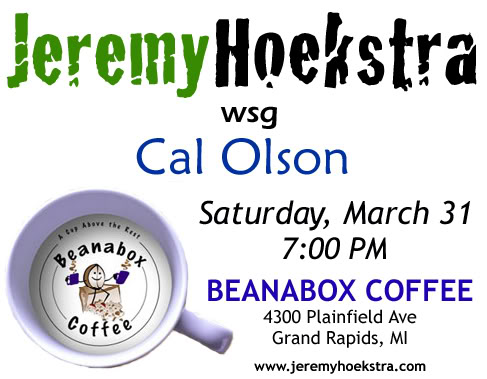 Yup – time once again for WCSG’s Father-Daughter banquet. In just a few , WAY too short hours, I’ll be schlepping my dollies and dishies off to Hudsonville.

This is one of my favorite events to play, even though I’m not a part of CU Radio anymore. I always enjoy seeing the dads and daughters together, having a wonderful night. And, I recognize some of them, year after year, as the daughters grow up and the dads grow nervous. 😀

One addition this year – my beloved is coming along to sell CDs for me. At last, the people who ask every year, “do you have a CD?’ will get the answer, “YES I DO!” I doubt we’ll sell many, but even a few helps.

Alright – time to start loading the van. The final countdown has begun!! (if you have a copy of “The Final Countdown,” and want to crank it up now for effect, have at it…)