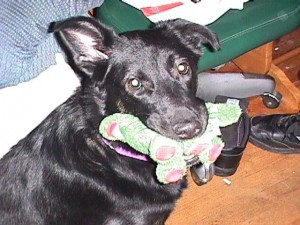 I finally figured out something today when letting Ezri outside after getting home… Sometimes, when she goes out, she’ll let off one bark toward the neighbor’s yard. Just the one, then she’s off to do… what dogs normally do in the back yard,… and then back inside.

The odd thing is, after she’s back in, I’ll often hear other dogs barking a bit. What’s up with that?

I finally figured it out… It’s the canine version of Marco Polo!

At last, the truth is revealed. Or at least imagined. 😀