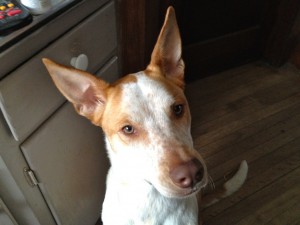 The following scenario plays out pretty much every time a certain furry critter in our house gets her hungry on. And it’s something she’s done since she became a part of our family…

So, here’s the drill…

She wanders over to her pen, browses through the various things in there, like some sheets she can toss around or lay on, a couple of toys she can chew on, her water bowl (always an important part of her daily requirements), and then peruses the bowl o’ kibble.

She’ll sniff around the bowl, analyzing the kibbley fragrance therein, then gently reach in, pick up a few nuggets of kibble goodness…

And bring them out to the rug in front of my chair, munching them there.

If things are up to m’lady’s usual standards, she’ll head back into the pen and proceed with the rest of the meal.

If she’s unsure, she’ll head back into the pen, pick up a few more nuggets of kibble goodness, bring them back out to the rug in front of my chair, and once again sample the kibble du jour.

After the second tasting, the possible outcomes could include:

Another sampling o’ kibble; A final decision to commit and munch down the bowl (and yes, I do mean that literally – she’ll down the kibble, belch thunderously, and grab her bowl to fling around…); Or, she could decide that she’s not really in the mood for kibble, whereupon she’ll grab some of those sheets I mentioned and bury her bowl under them.

We’ve never had a dog who had such a complicated process in place to decide things in matters of the munchies. I’m not sure if it’s the Ibizan Hound equivalent of casting lots, or the doggie version of the Urim and Thummim, or… um…

Two of them were certified Hoovers – put the bowl down, doggie proceeds to suck up the kibbley goodness, hopefully taking time to chew at least a little.

(The second of those, Ezzie the Wonder Dog, had to have some help to slow her down – a bowl with obstructions she had to dig around, or a kibble ball she had to bat around to get the food out of. She still horfed the stuff down in an alarmingly rapid fashion. Ah well.)

The one between the Hoovers, Kira (our Husky, and absolutely momma’s girl…) was a slow and dainty eater, totally on her terms and her schedule.

So no, we’ve never really had one like Beka. The whole “take a taste test, then consider what to do next” thing is new to us.

Where did she learn this? What inner calling or instinct led her to pretend she’s at Costco on a super Saturday sample day, “where kids eat free always?”

I’m sure that I’ll never know.

(Don’t laugh – I know someone whose idea of taking the kids out to eat was just that – hit the samples, hit ’em multiple times, and repeat until the kids are full. Really really REALLY embarrassing… and I wasn’t even there. Just heard the tales afterward. *shudder*)

Although I don’t think that dogs have immortal souls, I’d be delighted to be wrong about that and meet up with Beka someday where the lion and lamb lay down together.

And I’d be even more delighted if the Narnia model turned out to be true and we could talk with our furry friends.

Now THAT would be heavenly.

I’ve been trying to think of a spiritual application for this whole bundle of fluffy… other than “Taste and see that the Lord is good,” that is.

And maybe that’s alright. Sometimes we can just observe the oddities around us that make us wonder, and leave it at that. We can ponder the quirks and craziness, the weird and wonderful, and simply sit back and smile. No deeper meaning needed – just enjoy the little things  reminding us that God has a really great sense of humor.

Oh – watch out for the kibble burp. It’ll arrive about 30 seconds after the kibble goes bye bye. Yowza.

And if you value your sanity (And sense of smell – or so I’ve been told, since I’m incapable of experiencing the full impact…), DON’T be standing behind her when she goes into a full-length stretch. Trust me on this, my peeps. *shudder* Trust me.

Just stand back (Well away from the stern…), wonder, smile, and enjoy God’s weird world.