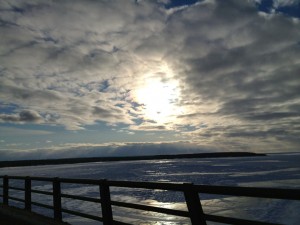 Before we bring this thingie on to the stage, let’s welcome the opening act – a random act of randomness…

———-
I had a thought this morning, and though I’ve tried hard not to encourage Steve, the Mental Hamster, in that sort of thing, sometimes he flexes his furry little muscles and I can’t stop it…

I wonder if the reason I’m always trying to do things with my hands – loom knitting, wire jewelry, leather work, sewing, the list goes on and on, including my most recent obsession, crochet – is because so much of my giftedness is wrapped up in bringing the intangible into the world? Music, writing, storytelling – all things that are spun out of nothing into something, but still nothing that really endures.

Music is real in the ears of the listener, but two people don’t hear things the same, so there’s no permanence – nothing endures so you can point to it and say, THERE it is! Written music does endure, sort of, but it’s only heard through someone else’s interpretation. It’s not permanent – it doesn’t stand on its own.

Words can be written down, so you would think there’s a measure of permanence, but words make up opinions, ideas, thoughts – all sorts of things that morph in the minds of the readers. Even facts aren’t lasting, since we know that today’s fact is tomorrow’s statistical spin fodder…

Stories are never intended to be permanent – they grow and evolve in the telling, and will always change as they are passed from one to another, from generation to generation. They endure, sort of, but they aren’t permanent.

On the other hand:

(Unless BekaV got to it first, that is. If she gets a fang on it, it’s history. Right now. No judge, no jury, just shaggy, worn, soggy, and shredded – to be “deposited” in the back yard sooner or later…)

I wonder if this whole “trying to find something to create that stays thing” – something made from something instead of something made from nothing – is even more of a deep need for someone like me, dealing with mental issues as well as a skill set that leans toward wading in the intangible? For me, my creative pursuits and my basic abilities take me far into the abstract, and then my mental balance / maintenance demands sojourning there as well.

Crochet (or whatever) gives me something real, tangible, and physical to hold on to, to work with, and to see the results of. (Never mind that it looks like something horked up by a yarn beast who ate too much spicy food and then went on a roller coaster bender – it’s still a “real” something that I can touch and see and feel, unlike a lot of the stuff I’m driven to mess with.)

Thanks for indulging me in this random thought. Now, let’s get on to what this actually is about…

Why does it seem that when it comes to our gifts, we’re the last ones to know?

Ok – I guess I mean we’re the last ones to acknowledge.

The last ones to admit?

Modesty to the point of non-existence?

See, this notion that I might be a writer is a fairly new thing to wrap my noggin around. Some of my peeps who have known me for years and years find it quite odd that I write, that I actually am sort of maybe pursuing writing, that I kind of possibly find some joy and purpose in writing, and that I wonder or speculate in a quiet, under-the-radar kind of way if this might possibly be something in some vague form maybe kind of worth making a tentative sort of priority (possibly) in my life.

I mentioned the confused thing, right? Ok – just making sure.

But then, others who haven’t known me quite as long, and perhaps don’t know some of the depths or at least slightly-more-than-shallows of my world, well, they seem to be non-shocked at my quasi-possible, maybe, writing life, and even sometimes actually encourage, support, and are semi-non-tentatively accepting of this whole “maybe I are a writer kind of sometimes possibly” thing.

This writing thing, as I said, is a new thing to wrap my noodle around. My mom was the writer, not me. I’m the comedian, musician, and village idiot of our clan.

(Why yes, I am the youngest. How could you tell?)

You’re a writer and a storyteller.

You’re a gifted writer and storyteller.

Do you have ANY idea how hard it was for me to type those phrases and not immediately hit DELETE about a thousand times?

(That’s BACKSPACE or BKSP or something to you non-Mac folks. I’m such a MacDude that I’m surprised one of the many moles on my back hasn’t spontaneously reformed into an Apple logo.

Why does it seem like sometimes, when it comes to our gifts, we’re the last to know?

A giftedness blind spot? A “pay no attention to those gifts behind the curtain” moment? A “homie got mad skillz, fo’ sho” singularity?

Word to yo’ alpaca.

Or, maybe our true gifts, our real ones – the deep ones that encompass who we were always meant to be, giving us a little picture of what Kingdom life is supposed to be all about – remain so central to the core of our being that we use them, live them, become them, without even being aware of their existence?

Maybe the gifts that we know about, that we recognize and “use,” aren’t the real ones – the core ones that point to who and what God made us to be. Perhaps if our core gifts were on the surface, where we can easily see and admire them, exercise them under the guise of “using them more effectively,” (Which can be a code phrase, meaning “trotting them around where others can see their fancy plumage…”) or otherwise fixate on them, perhaps they’d creep into the center ring, taking over the whole shebang and displacing the One who should sit on the throne…

And oddly, perhaps they’d seem to morph into the shape of a gold cow… Or is that just one of my strange mental pictures? I’ve really got to get the horizontal hold fixed on this thing…

(A number of you didn’t get that reference, because “horizontal hold” isn’t something you’ve ever encountered. Bless ye, little younglings. That’s why the good Lord invented Google…)

Perhaps those gifts (Dare I call them our “true gifts?” I guess I just did.) are too easy of a pride target, so the Lord allows them to grow in relative obscurity, protected from the forces in our broken world that would kill them at first sight.

When they’re strong enough to pop their heads up out of the soil, when they’re far enough along to survive outside the pouch, when the momentum of their existence allows them to roll over the initial obstacles that would stop them before they ever get a chance to get going…

Then He lifts the curtain, switches on the lights, and says “Look what I made for you!”

You’re a writer and storyteller.

You’re a gifted writer and storyteller.

And there we are, blinking in the bright lights and the shininess of it all, breath taken away, stunned by the possibility that this is ours, that it’s always been ours, and it’s finally here.

No wonder we can’t seem to speak of what we hope,  just in case we were dreaming, and it isn’t really ours – isn’t really “us.” We keep expecting a knock at the door, where someone in a tidy uniform says, “Sorry – this was delivered to the wrong address. I’ll need to take it back.”

So this gift, this thing that’s so deeply a part of us that we can’t even imagine it, becomes more and more visible to everyone…

Except the one it belongs to.

Yes, my peeps – I guess I am a writer. I really am a storyteller.

Give me some time, would ya? We aren’t going to walk the whole distance in one day.

So, what say ye gentlepeeps all? What’s hiding behind the curtain, just waiting until the lights come up and He says, “Look what I made for you?”

I can’t wait to see what yours is.

And I’m thinking I’ll see it before you do, ’cause I think that’s how it’s supposed to be.