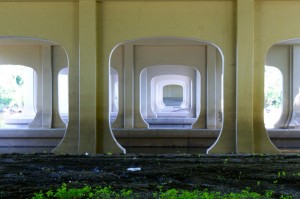 If I were to look back at my personal history…

(And who would pass up a wonderful opportunity like that?

I think the trend that would be most clear is “navigation by inaction.” I think it’s fair to say that a large number of the decisions in my life were made by simply waiting until all the options sorted themselves out or died off as time passed, so the last one left standing got the nod.

Not a great way to steer the ship.

My college path? Pretty much floating along in the general music area, without having a clear idea (or fuzzy or even “grungy beyond the help of glass cleaner”) of what I’d do with it.

God loves His kids, so He had, waiting in the wings, a slight aptitude for broadcasting, to give me a place to stand for 20-some years, ALMOST 20 of those full-time in Grand Rapids.

(Yes, I probably do still have some unresolved issues with being laid off 6 or 7 months shy of my 20 year anniversary. Grrr…)

God also made sure that I was in the exact right place to meet the cute little girl that would become Herself, my Beloved and my Best Friend.

He knows that if the decision is too complicated, I’ll have a tough time with it. So, He made it simple – see her? Marry her – NOW.

Ok – I can do that. And did. And all rejoiced, especially my mom, who got a much-loved daughter out of the deal.

But as for making decisions, charting a course, setting my eyes on a goal, deciding on a path, or other good adultesque stuff like that, well…

I tend to stumble into things as opposed to sitting down and actually choosing them. Or planning to go in that direction. And really, I can see a lot of grace and mercy from my Father wrapped up in that. He knew that learning to decide, to choose, to find a path under my own power (with His help, of course…) wasn’t something that I was up for just yet.

Much of my childhood and adult life was spent with extra baggage – a LOT of extra baggage, in the form of more than 200 pounds of extra weight to tote around. That left me a little passive, since the strength to move, to decide, to take action and choose a path was pretty much out of the question… After all, if you barely have the strength to waddle through the day, the energy to grapple with decisions and choices just ain’t in da house.

So, peel off a layer – like sleep apnea, for example – treat it, start actually sleeping at night, and then things will be just dandy, right?…

No. Peel off another layer…

Take off 240 pounds, basically rebuild from the ground up, so without having to drag all that extra weight around, things will just be peachy, right?

No. Peel off another layer…

Ok – let’s take some steps to deal with depression and bipolar. The meds are working, I’m learning about triggers and behavior and how to watch my emotional barometer and keep a semblance of control through the day. So now we’ve reached the land of hunky-dunky, right?

What you have left is someone who doesn’t really quite know yet who they are, even though they finally recognize their face in the mirror. Three years of uncovering layer after layer – is it any wonder that the person that’s left is still standing there, blinking in the sun after being in the dark for years and years?

Decisions? Choices? Give me a break.

But, those skills – deciding, choosing, taking a path, even if it turns out to be the wrong one, then shifting and taking another one, learning from the wrong ones and rejoicing in the right ones – those are necessary skills for anyone to possess.

(And just to get ahead of the Proofreader, yes, I am now 54. And yes, I did actually start working on this “decisions and choices and related poopy” sometime between 51 and 53, so perhaps the blanket statement “In my early to mid-fifties” would be a bit more accurate. But let’s face it, sweetheart – if the peeps wanted accurate, they wouldn’t touch this blog with a 10 foot [actual measurement – 9.728] pole…)

Why yes, we do actually have discussions like this. Thanks for asking. Back to learning and choices and other fluffy like that…

It’s not easy. Imagine taking your toddler, and telling them, “Ok – today you’re going to decide what steps we are going to take in the next 24 hours to begin to relieve our financial struggles, including making goals for action steps to get this puppy going.”

I get to learn toddler skills using adult decision material. Not fun. Even a little.

See, it really is like that, saddlepals. In many ways, my odometer was reset to zero, and I’m starting all over again. Between dumping half of myself, and then finding the mental challenges hiding underneath, I really don’t have some of the skill sets a person my age should have.

But I can tell you a fun story. Or make you a little doggie out of a balloon. Homie got skillz – they’re just silly skillz.

And yet I have to be capable of those much-loved “adult decisions.”

Ok – how about just a graham cracker and some milk? Hello?

Choose a path. Walk a bit. Oops – not the way I was hoping…

All is not lost. Stop. Turn. Make another choice. Head in a new direction. See if this one works.

If not… Stop. Turn. Make another choice.

Along the way, the Lord gently reminds me that it really is just that simple. When I see options all around me, making the room spin, and I feel powerless to even try to sort any of them out…

Ok – Decision Making for Adult Toddlers 101. Sign me up – I’ll be there. Kicking, whining, and still wanting a cookie, but I’ll be there.