You heard me. Oatmeal.

For the last 10 months or so, this blog has been on a more serious note. Granted, the rather profound changes that have been happening to me would seem to warrant that. But, the dust is settling, the new path is getting a little more comfortable, and thinking about WCSG having sharathon next week is putting a smile on my face.

(you can figure out that last part. Suffice it to say I’ll be thinking of all of my former co-workers, whilst in my slippers and robe, and be laughing… a little.)

So, I’m going to make an effort to lighten things up. And it all starts with oatmeal. Yes, oatmeal. Dreaded by some, loved by others. We would be the latter around das Olsonhaus… We’ve always loved oatmeal – no milk, maybe a bit of butter, and definitely a healthy (or unhealthy, depending on your viewpoint) dollop (spoonful, shovelful, pass me the whole bucket, would ya?) of brown sugar.

Instant oatmeal? Well, it’ll do in an absolute emergency. Quick cooking? No – if you’re going to take that much time, you might as well take the time for the regular old stuff. The problem? Even the long cooking stuff can be done in 5 minutes, but you end up with oatmeal where the oats are a little too al dente for me. I like my oatmeal to be more mush and less chewy. You only get that either by soaking the oats, or cooking it a long time, watching it like a hawk lest you get something that resembles a tan block of cement in your pan with a golden black underbelly. A double boiler helps avoid that, but still a little too much time invested for this impatient man. You can also do it overnight in a crock pot, but that’s a song for another day.

So, to this little scenario, we add one element that has brought joy, laughter, and morning-time yumminess to our home. Ladies and gentlemen, I give you… 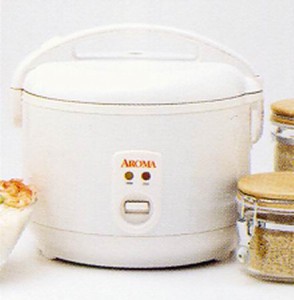 The humble rice cooker. (TA-DA!) Yes, the rice cooker. And I’m not talkin’ one of those luxo-top-o’-the-line best rice short of a trip overseas thingies. We got ours for $20 at Costco. Cheap works. Really.

So, here’s how it goes down. You make the oatmeal according to the directions on the package. Only you put everything in the rice cooker. Then hit start. And, 20 minutes later (or so, depending on your machine), you have oatmeal. Actually, we then leave it on the warm cycle for a while, just to make sure it’s softened enough. We can make it when Vicki gets up, so she can have some, leave it on warm, and I’ll have some when I get up. (yes – my wife rises earlier than I do. And, for the record, usually I’m up to see her off. But sometimes… not.)

The added benefit, besides being able to use this gadget for more than just rice? Ours allows you to preset it. We set it for however many hours we want to have oatmal ready in, go to bed, and the next morning, voy-lah, there it is. Grab a bowl, a spoon, and a case of brown sugar, and have at it.

And, best of all, the 9 pound box of Oatmeal is on sale until the 12th at Costco. We now have enough oatmeal to get us through most of the winter… maybe.

So, like oatmeal? Got a rice cooker? You got it made. YeeHaw.