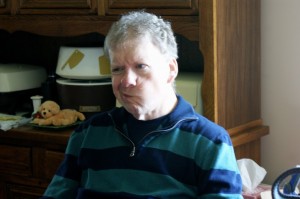 So, here we go again…

I am once again wading into the turbulent waters of part-time employment. Lord help us all.

And, as He seems to take great pleasure in doing, God led me to one job, only to throw in a sharp left turn at the interview, putting me in a different job at the same place that seems to fit me better.

And as the paperwork gets going, uniforms get ordered, and my lengthy tainted background is scrutinized, I think about work…

(About that “tainted background” comment: I kid, I jest, I make a funny… really. No need for anybody who’s reading this in connection with a background check to think I’m anything but what I seem to be – slightly quirky, with a weird sense of humor, but totally harmless. Really.)

It’s an “entry-level” job, paying a little more than minimum wage. Perhaps not as many hours as I would have hoped, but it’s a start. And it leaves some windows to find a second job to fill things in a bit more, or to sell all sorts of stuff and dial our house and life back to better proportions. It also leaves room to write, create, and pursue some of the other “things” God seems to call me to.

So, as I think about another “entry-level” job in my mid-fifties, whereas many of those in a generation before me were well-settled in their careers and the only dramatic change they anticipated involved retirement and a pension, (Not so for this boy and his “nomadic career path” – I really love that description of my journey thus far…) I’ve arrived at a bit of a revelation:

You can excel, you can shine, you can reflect your Creator at any job, anytime, anywhere.

(“Anytime, Anywhere” happens to be a pretty awesome song by Sarah Brightman… And since it’s based on Albinoni’s Adagio, which happens to be one of my favorite pieces, the awesomeness is twofold…

But the Proofreader doesn’t let me listen to that piece too often – the Albinoni, not Sarah Brightman – it may cause weeping, could trigger depression, or result in Calbert being even weirder than he usually is.

Ain’t nobody got time for that…)

This rambling line of thinking was shaped in part by our pastor, who shared a story from How Starbucks Saved My Life: A Son of Privilege Learns to Live Like Everyone Else by Michael Gates Gill. Now, I’m not “A Son of Privilege,” and I’m part of the Biggby Nation, but still – I saw some dots to connect, and found myself on this train of thought.

One that could easily be pulled behind the Little Engine That Could.

Without making him break a sweat, that is. Or oil. Or whatever it is that Little Engines break out in.

The jobs I seem to be able to get these days are considered entry-level – they usually don’t require experience, don’t bring a lot of bacon to the table, and tend to have a bit of turnover.

The reason I seem to live at this level in this season of life?

Because in the two areas that, for me, could be called “career paths,” (if you have a particularly broad definition and view of that term…) one is in music (performance, not teaching or anything else that would be practical and marketable…); and the other is in broadcasting (radio, actually). But if I were chasing my radio dreams, I’d either be told that my voice is too Winnie-The-Pooh-esque to work in mainstream radio, or I’d be doing a typical radio lifestyle, moving from station to station and town to town – a lot. (For a pretty clear reference on this, listen to Harry Chapin’s “W-O-L-D.” Way too accurate description of radio life.)

Actually, in this modern age, it’s more likely that I simply wouldn’t get hired, since only people with astonishing voices get hired, and ship their voice tracking over to whatever station hired them without ever setting foot in the building. If you have a great voice, you can be on many stations at the same time, through the modern miracles of digital audio and technology. And you can make some pretty good coin in the process. Sort of.

If you don’t have a great voice, well, that’s where we get back to the point of this fluffy goodness…

Entry-level jobs, then, seem to be my gigs in these latter days of my life.

That doesn’t mean I’m an entry-level employee. After all, this ain’t my first rodeo… Not by any stretch of the imagination. Even my imagination, and that IS saying something.

And truly, so far in my entry-level career wandering, the jobs I’ve had aren’t ones that somebody who’s on their first time around the block would tend to get. Being a Systems Monitor (my previous gig) may pay minimum wage, but the job requirements demand that you bring a lot more than that to the party. (Including a flack jacket, especially when entering the pharmacy. But I digress…)

My new job calls for integrity, attention to detail, and a willingness to deal with crabby people late at night, sometimes telling them things that they don’t want to hear at the end of a long day of travel, and to still remember they are Image bearers, worthy of love and respect. Again, an entry-level job requiring a more-than-entry-level attitude.

So, in the light of that truth, I raise this stone to help me remember:

I may have a so-called “entry-level” job, but that doesn’t mean I’m an entry-level employee.

And by rising above “entry-level,” I give glory to the One who lifts me above entry-level in all areas of my life.

Entry-level? No – I’m exactly at the level my Father wants me to be at, right here, right now.

(The cynic in me really wants to insert a comment here, to kind of balance the Polyanna-esque vibe of that last statement… It was almost too “bright and cheery” to be something I said, let alone actually believe.

“He who dealt it shall smelt it.”

There. Balance has been restored to the Force…)

Let me say it again, since I do actually believe it – I’m exactly at the level my Father wants me to be at, right here, right now.