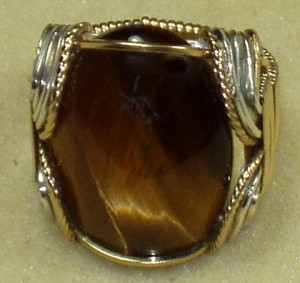 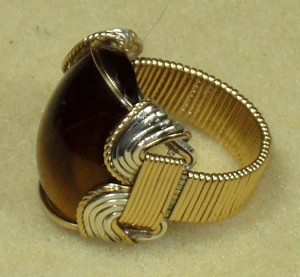 I can’t remember if I’ve ever posted any pictures of the jewelry I’ve made here. So forgive me if I indulge myself.

Last night, I made a new ring that’s probably the best one I’ve made yet. Now, understand that I had stopped making this pattern for a bit – because I had three of them crash in a row. Kind of made me reluctant to try again. But, I got back up on the horse, and went for it. The result is this Tiger Eye ring that I’m really proud of.

Sorry if these pictures are a little too large and showy – I was hoping you’d be able to see the detail in it. Like I said, I think it’s the best ring I’ve made. What it all starts with is some pieces of Sterling Silver and Gold Filled square wire and a Tiger Eye cabochon. From there, it’s all hand work and plier work, and if all goes as it should (and in this case, it did!) the end result is a ring.

So I smile, amazed at how far I’ve come in one year. Last year at this time, I was wondering if there was any future for me, and the only jewelry I had made was stringing beads into necklaces. A year later, God continues to reveal Himself through deep waters, and I’m learning more and more about wire jewelry. (and LOVING it!) A lot can happen in one year, including learning more lessons about grace and mercy than we ever expected.

WHEW! I made it! Danced all around the edges of one of the banned topics without actually breaking the rules. 😀

Vicki figures that it was just a case of too many pendants all available. But neither of the pieces sold. Ah well… we may try them again, or we may do something different to see what will sell.

I’ve noticed that I have a tendency to get into things just about 2 seconds late… when I started storytelling, it seemed like that was the exact time that storytelling became popular again, and you couldn’t throw a stick without it hitting a storyteller, who, immediately began composing a tale about it. Now, it seems like there are wire jewelry artists all over the place, so even the most unique stuff (which mine isn’t…) gets lost in the sheer mass of it all.

But, I love the work, and the bills are paid… almost. 😀

One note of concern for folks to pray about… we are approaching the point where there will be no more money to keep my mom’s house afloat. We’ve been managing the bills for the last 3 years, but we’re reaching the point where there will simply be no more money to keep it. We were hoping that it would sell, especially after the repairs we had done to it, but as you well know, real estate is dead right now, and there doesn’t seem to be much hope for it to sell soon.

God will move according to His time, so we’re praying He will either sell the house when things don’t seem to be selling, or will show us what we need to do next. Thank you for joining us in prayer about this!

Something new for us… we’ve put a couple of my pendants up on eBay, just to see how they do. If they go well, we’ll be putting up others very soon. If you’d like to see a couple of my pieces, check out these links:

If you’d like to see others, let us know. We’d be happy to show you what I’ve been doing! 😀 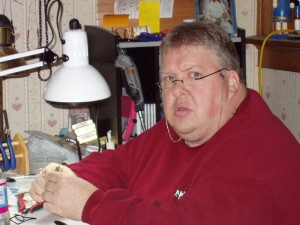 This is Cal without his Optivisor… 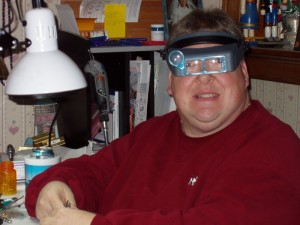 And this is Cal with his Optivisor…

(an Optivisor allows someone to see small things really big… kind of like reading glasses on steroids. And that round lens thingie is an Optiloupe – adds another 2.25X to that eye. This thing is way cool! Except I now see all the imperfections in the stuff I’ve been making… oi.)

I did my first craft show – albeit a really small one at our church – and it tanked. I sold a few CDs but only one piece of jewelry. 🙁 Ah well… I think it was more the night than the pieces…

SO – if anyone needs that extra-special Christmas gift, I DO have some VERY nice pieces all made up and ready for immediate delivery. 😀 Just let us know and we’ll hook you up. 😀

I’ve also made some of my first rings – great fun! I’ve got a couple of honkin’ big silver and gemstone rings that I made for my big ol’ fingers, so the bling factor around here is pretty high right now.