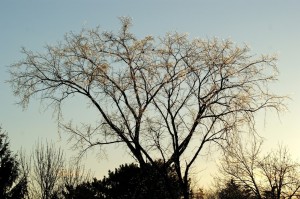 As in, the habit I have of rolling my eyes and thinking myself SO much better than the Hebrew children, since I’d never EVER go for a cow right after having trotted through the Red Sea. It’s brought to you by the same fine folks as the Friends Of Job Club, which I dropped many years ago.

So, as usual, I’ve gone off on such a bunny trail that even BekaV would have trouble following me down it. Actually, she’d be way the HECK out in front of me, since she’s about 100,000 times faster than me, even if I’m on a trike. Unless it’s a Harley trike, of course.

Herself and I were listening to the Daily Audio Bible this morning, and the OT reading was the story from Exodus – Moses on the mountain, getting the goods from God, and the folks NOT on the mountain, getting Aaron to make a cow. Brian Hardin (host, voice, and heart of the DAB) gave us some perspective on the story when reminding us that God is creating a new people, a new culture from the Israelites, since for hundreds of years their memories are tied to slavery. They don’t know how to live as free people in this new situation, since slavery is all they’ve ever known. So the commandments, the rules, the observances – all are intended to help take these former slaves and help them learn and live their new life as God’s chosen people.

But there are a lot of years, decades, generations of habits to get over. Habits that have only known Egypt and slavery.

So for the first time, when hearing the part where, after Moses has been gone so long, the people asking (begging, telling, threatening?) Aaron to make them gods to worship, my response wasn’t immediately, “You doorknobs! How could you DO something like that??”

I suddenly thought, “Well, perhaps the weight of their habits, generations of a very narrow worldview, seeing slavery as their only life, and not knowing the God of their fathers kicks in. Before they stop to remember all they’ve seen to get them here, they switch right over to the life and behaviors that are deeply written into their minds…” And it’s not too far of a flight of fancy to imagine that, because God continued to care for them and bless them, that they might have learned to attribute those blessings to something other than Him. At some level, God could have been forgotten and the idols all around them became the author of what little blessings they could find in their life of slavery. That might be stretching it, but it’s an interesting angle to look from…

No, there are no golden cows or anything like that in our abode. There is a cute dog, but usually she gets treats and cuddles, not worship. Unless I’m on a really strange prescription…

But all I have to do is see myself munching a candy bar, snarfing a piece of pie, or chowing down on some other food that really isn’t anywhere near the type of stuff I need to fuel my new life with, and I see my cow.

Although eating some cow is fine, for the record. Protein = good, simple carbs = bad.

The habits of 51 years can easily kick over the last 3 years. (Ok – it’ll be 3 years on March 30th… the Proofreader will appreciate that little detail.) The momentum of my life before I was ReBorn can sweep away all I’ve seen and lived and become over these years. I can yearn for my version of Egypt – candy, ice cream, and carbonated beverages, even though that path leads back to bondage, food addiction, and all that comes with returning to the 400 Plus Club.

That’s someplace I never EVER want to go again. I’ve been 486, and I don’t want to go back there.

But that’s someplace I could go again, if the old doesn’t pass away and the new comes and sticks around.

So, the Golden Calf Club? Nope. I’m just like those former slaves, wandering around, trying to understand what happened to them, and reaching for the only comfort they know. I can’t roll my eyes, throw up my hands, or otherwise think myself so much better than them.

Because the truth is, it’s way too easy for me to throw away the Promised Land for a Mounds bar.