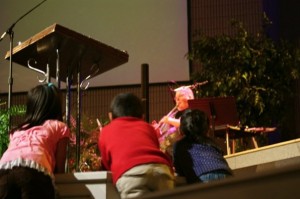 The following thought comes from Calvin Miller’s Singer trilogy – if I wasn’t essentially lazy, I’d go look it up, however since Google tends to be an open window for me to chase squirrels through, I tend to jot down the essentials and leave my intrepid reader to do the research.

This pretty much explains my massive number of readers – 2.58 and falling.

It is much harder to sing when the audience has turned its back.

Or, in the words of Garfield the Cat Bard, (And this one I can put quotes around and everything, since I’m actually quoting and not guessing – a rare occurrence here at TW’sW’s…)

(Pause to s-w-o-o-n with excitement…)

“Thank you for that large round of indifference.”

How much of our lives do we spend in hopes of approval? A pat on the back, a “like” on the page, a comment on the blog?

Or is that last one just me?

(And yes, I’m aware I don’t have that quote right, except for the whole Hi Yo thing. Remember – Google + Cal = SQUIRREL! Words I live by…)

And now, it’s time for another example of how different I am from my beloved…
See, she’s probably going to be proofreading these words before they see the light of day (at least we all hope and pray she will…), and upon seeing that I’m probably misquoting or just guessing on some of those things, she’ll have Google open in another tab before you can say “frapdoodle,” and will be deciding if she should actually put in the correct quotes and neaten everything up, or leave it be to allow the world to see once again her hubby’s rather unique (read: off-kilter and twisted) perspective on the world.

The following space is left intentionally blank… If she did the aforementioned research, looked up the aforementioned misquotes, and pondered if she should fix them for me, I command… um, suggest… um, pleadingly beg that she put the corrections in the following space, in a different color font, that all might know that I’m not making this stuff up. If she didn’t, there will be a lovely blank space for you to take an opportunity to roll your eyes at me.

Calvin Miller – “It is always much more difficult to sing when the audience has turned its back.”

In the spirit of Master Yoda (rather than quoting him) I say, “Told you, I did.” (Unless there’s just a blank space there – then Missy Yoda would be saying “Showed you, I did.” Well played, proofreader – well played…)

Recently on this here pony show of rambling miscellany, I brought something rather personal and deep to the light of day – my ongoing struggle with depression and bipolar disorder. Why I would write about something perhaps better left concealed is explained in that post, so I won’t run over that turf again. But one thing that came from it has made me do some thinking and examination…

And that thing would be, nothing.

No comments, no “likes” or such on a page, no emails or IMs of either encouragement or disbelief. No idea if anyone even saw those words – was it worth baring something so close to my heart if nobody would ever read it? If it does no good, encourages no one? What’s the point of writing if nobody hears it?

TW’sW’s is my personal journal. Note I didn’t say ‘private,’ just personal, since our Father seems to delight in telling me to hang my undies out there to dry before the whole world – all 2.58 of ’em.

(The readers, not the undies – just to be clear. The census of my undies remains undisclosed. There’s a reason to be thankful if you were needing one today.)

Writing is therapy, it’s processing, and it’s someplace for me to laugh at my own jokes. Nobody else may find this poopy funny, but it amuses me.

The point is, it does a good work in me, it changes things in me, and as my beloved so wisely said, “It’s where the maintenance gets done.” (And that’s a QUOTE, people! Woo hoo! He got one right!)

(You mean besides the Garfield quote, honey? :-D)

*Insert sound of 2.58 readers either clicking away to far-flung pages or bleaching their eyeballs –  although the former is a better choice than the latter. Totally.*

So why do I feel let down when there’s no approval? No comments, no “likes,” no nuttin’?

Because, I think, when we put something out there so intimate and personal, we’d like to think at the end of the day that laying ourselves open like that was for a reason, a purpose. If we’re struggling through a tough issue, and making the battle transparent so that others can see it (“others” meaning folks that have a similar struggle, feeling like they’re all alone in the fight), then it’d be nice to know that making our flaws and brokenness show to others is worth the effort. Otherwise, why let people know how messed up we are? Why trot our junk out there for everyone to see? Why put a huge picture window on our front wall so the professionals from Hoarders can look right in and say, “Dude – I’m not goin’ in there. EVER.”

Because “God works in mysterious ways, His wonders to perform.” (Yes, it’s a quote. From a hymn. No, I don’t remember which one. And no, I’m not going to go look it up, lest I be chasing squirrels down the information superhighway for the next hour or two…)  (God Moves in a Mysterious Way, “God moves in a mysterious way His wonders to perform…”, written by William Cowper, a British poet and hymnist who struggled throughout his life with depression, doubts, and fears.)

God doesn’t give us the “here’s-why-you-did-that” cam. Or a script, so we can read ahead to scene 22 where the big reveal happens. Our lives don’t have footnotes, so we can turn to the end of the chapter and see what it all means.

There’s no appendix at the end giving us the timeline and what happened to the characters after Frodo and Bilbo hop on the grey ship and sail off the end of the world. Or the smack upside the head Rose gives Sam after he ran off to hang out with Mr. Baggins and left her with the kids and the garden and the chores for a few days.

And really, we don’t need it. We don’t need the comments, the “likes” (As opposed to the “Lykes” – I do indeed need my nieces and nephew, ’cause I loves them kiddos, I do…), the attaboys, the affirmations, or any of the praise of people. We don’t need to know that our stories helped someone else, or that we have significance in some situation somewhere. Nice? Yes. Necessary? Nope.

Does anyone read these words? Probably.

Does being transparent in my struggles have significance? Yes, because I do so in obedience to Him.

If I trip and fall in the woods and there’s no one around to hear it, do I still scream like a little girl?

So I struggle, I strive, I stumble, I stagger. I write, I think, I work and the maintenance gets done. I post, I publish (or at least hope to, if He says that’s my path), I tell the story (if He gives me the opportunity) and I remain as transparent as He asks me to be.

As long as God is the Hero of the story, as long as He is the theme of it all, and as long as my little steps and efforts point straight to Him, then that’s reason enough to go on.

No comments? No “likes?” No attaboys? No worries.

The One who calls me to my ReBorn life is the only One whose approval I need.

As for laughing at my own jokes? Bonus, baby. Oh yeah.