Skip to content
Another throwback from the Advent Writings – obviously not written anywhere near today, in 2013… 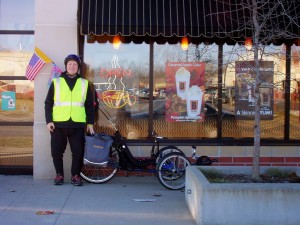 What an amazing day! What was supposed to be 1-2 inches of snow turned into a blazingly sunny, chilly but beautiful day. A day when Grand Rapids bid farewell to Fred Meijer. A day when I left the car parked at home, and rode the trike to my Biggby office. Light, marvelous light, brilliant light, abundant light.
I think introspection and deep pondering is best saved for sunny days. Grey days, when one would think it’d be best to curl up with a book and some cocoa in front of a fire, don’t make the best pondering days for me. The grey outside tends to call up the grey inside, and it all goes south from there. Do your pondering when the sun is shining, and the light within tends to rise up and join it.
Why yes, I do struggle with Seasonal Affective Disorder – why do you ask?
So what do I see?
I see brown all around, the leaves having long left the branches, the world shutting down for a chilly nap. And yet I see people, almost as if they’re picking up where nature left off, putting up lights and trees and other shiny bits. Bringing out red and green and gold, wrapping and stars, snowmen and reindeer.
And lights. Lots and lots and lots of lights.
Cozy Christmas sweaters, some of which are so horrible that they should never see the light of day (which is exactly why they get trotted out every year…), make their appearance. We show our willpower and restraint to not hit the Christmas playlist on the ol’ iPod until 12:01 on Thanksgiving morning, while at the same time getting disgusted looks on our faces when the seasonal offerings get thrown up on store shelves at 12:01 on Halloween morning.
In some ways, we charge into the season, and can’t get there fast enough. In some ways, we dig in our heels and try to keep the days from flying by. And in some ways, we get ready for the letdown that we know is coming, 12:01 on the morning of January 2nd, when the bullet train of the holidays vanishes over the hill, out of sight until next year. The 2011 edition of the Greatest Show in December is a wrap.
What about Advent?
If the season is indeed about preparation, looking forward to the arrival of the King, why does it sometimes feel that when He gets here, we hit a wall at 60 mph – all that rushing force meets the immovable object of the new year. What good is all that preparation if we don’t do anything with it after the calendar turns over? We go from Advent to what? Do you know? The Church year is about moving mindfully through the seasons, so what happens next? What are we preparing for?
Not so fast, Grasshopper – we’ll turn that page later.
Anticipation, preparation, excitement – not just for the purpose of celebrating one day, or even one week, but for a greater purpose: making the coming of the King a reality in our lives all year long.
What if we go through Advent mindfully aware that all this preparation is not just for celebrating the arrival of the King, but preparing to step into this new year having restored Him to His proper place in our lives? What if the point of this is getting ready to see this entire year as an opportunity to live as people of the King?
What if this year the decorations, the shiny bits, the songs, the celebration… what if the whole point is taking that light and joy and making it an everyday thing, because the King has come? He is here, He is with us, and we don’t ever have to live in the darkness alone again.
To take an idea from a song by Sara Groves (“I am the moon, with no light of my own. Still you have made me to shine…”), what if we become the shiny bits, to reflect the King’s light all through the new year? What if we ARE the Christmas lights, not to be taken down and stuffed away in a box marked Christmas decorations, but left out to glow beautifully the whole year long? The celebration never ends, never gets swallowed up in the mundane, because He never ends, and He never gets swallowed up in the mundane!
I think my focus through this Advent season is going to be preparation for the year that is coming. I want to mindfully note the joy of Christmas, the way that we all put aside so much of the “same old same old” and embrace the different schedule, the additional gatherings, the busyness, the craziness (much different than madness, by the way) and all the extra good stuff that we cram into this season. Then I want to take that excitement and keep it to sprinkle through the year to come.
We’ll celebrate the arrival of the King, but the greatest news is that He stays. He’s here. I’d like to see what this new year could look like if I try to live in that reality. To be shining all year with Christmas light.
Instead of dreading the train disappearing over the next hill, taking Advent promise and Christmas joy with it, I want to eagerly climb on board and ride that bad boy into the new year, shining with light that’s not my own, looking forward to the adventure that He has waiting for me.
And for each of us.
“Arise, shine, for your light has come,
and the glory of the LORD rises upon you.”
Isaiah 60:1 (TNIV)