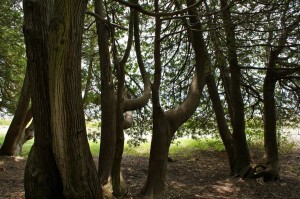 Ok – let me be clear about something – I have no issues with Rob Bell.

I think he may have “jumped the shark,” but that’s just a private conviction…

Between me and you, that is.

Recently, being fabulous and “all that” with Oprah, he responded like this when asked about the church accepting gay marriage, in a quote from the article on Mlive.com…

“We’re moments away,” Rob Bell said. “I think culture is already there and the church will continue to be even more irrelevant when it quotes letters from 2,000 years ago as their best defense, when you have in front of you flesh-and-blood people who are your brothers and sisters and aunts and uncles and co-workers and neighbors and they love each other and just want to go through life with someone.”

This statement didn’t shock me – I have personal thoughts about issues like this, and the place to air those is in very private, between my Father and me.

But the bit that DID make me wince a bit?

“…the church will continue to be even more irrelevant when it quotes letters from 2,000 years ago as their best defense…”

Gee, Mr. The Rob, what other defense do I have? When most everything I know about God is what I read revealed in His word – those “2,000 year old letters.”

Now, lest you accuse me of taking him totally out of context, and that he was just referring to the bits of those 2,000 year old letters that he deems culturally irrelevant while still having a profound respect for other bits…

Re-read what you’re accusing me of, and consider the lack of logic therein.

Now, I admit to a certain amount of bias – after all…

I’m in love with a certain book.

And I love the whole of that certain book, including those “2,000 year old letters,” and the ones that are much older. The letters that, oddly enough, Rob himself can be heard quoting in his Nooma videos, or teaching from in his sermons.

Sorry – that almost crossed the line into “snarky,” and I don’t want to go that way…

Ain’t nobody got time for that.

Instead, to show how much I love that book, let me refer to one of the foundational phrases of the denomination I’m a part of – the Evangelical Covenant Church – that describes how we view our lives as people of faith:

Where is it written?

That phrase reveals one of the main reasons I love our church – the encouragement, yea expectation, to “search the scriptures and see if these things are so.” There is both a danger and a great freedom in belonging to a church where people are allowed, yea encouraged, to search the Word and decide for themselves what these things are saying. To bear the personal responsibility of answering a question from Jesus: “How do you read it?”

Can you actually point to scripture that supports your position, or do you find yourself simply dismissing the Word as culturally irrelevant?

Now, I’m the first one to admit that one has to interpret the Bible within the context of their time, their culture, while applying it to our time and our culture. Do we follow the letter of the Levitical law, for example? So if one lifestyle is prohibited, then so are tattoos. Or you can cast your wife aside as easily as a beast of burden. And let’s not forget offering up your children as human sacrifices…

(For the record, sacrificing children [or any humans for that matter] is abhorrent to God – He says so numerous times, mentioning that practice as one of those detestable things that show how far His people had fallen.

Anyway, so go the various arguments toward how out of step the Bible is with our current world.

And that’s pretty poor scholarship, to tell the truth. Baby, meet bathwater. You’ll both be thrown out now.

There, saddlepals, is the danger of not taking the Word as a whole, but grabbing one example here and another there, and using this quote and that quote to prove your point of how absurd the whole thing is. Once you add in context, history, and looking at the whole picture, it becomes obvious just how silly those arguments can be.

Consider tattoos, for example – this was a slave race, recently come from Egypt, wandering in the wilderness, so marking themselves up with tattoos wouldn’t be very sanitary. (What – you think all those references to “rashes of the skin” or “when mold appears in a house” or “emissions” *shudder* are there just to be silly? Nope – it’s hygiene 101 for a bunch of former slaves who have no clue how to take care of themselves.)

That’s all a side note, by the way…

The major point about “no tattoos” is the associations hooked to the tattoos – the connections to worshiping the gods of Egypt or other aspects of their lives under slavery. Those would bring back connections to a life that needed to be left behind, as God remade these slaves into His chosen people, a new nation.

If you look at a lot of the prohibitions in Leviticus through that lens, all of a sudden the argument about “cultural irrevelance” becomes a little silly. In that time, in that place, in that culture, it makes sense, as God taught them to be a unique people after generations of living as slaves.

Here and now? We aren’t likely to associate a tattoo with our former lives in slavery, which could lead to a return to that oppressed life. Granted, some of my generation and older still see tattoos as a mark of rebellion or something, but give us some slack – we’re learning. I actually have seen some that were quite beautiful.

If you think that this line of thinking and interpretation of the Word is a whole load of Calbert-flavored hooey, well, you are certainly entitled to go that route. But, you might not understand something called a “trigger,” which might be helpful. I shall elucidate…

A trigger, especially for someone who deals with mental or behavioral issues, is something that can trip you into a place you left behind. I have a number of those, both for food addiction and for dealing with depression and bipolar disorder. And sometimes, another one pops up out of the blue and ambushes me.

(Want an example? We had to put my gigantic recliner out on the curb after I lost 240 pounds – I’d sit down in it, and my behavior would revert to when I spent 6-8 hours in it at a stretch. Couldn’t work through it, couldn’t re-wire around it, so it had to go.)

So I totally get this picture of restrictions designed to help you leave a former life behind.

And, that connects to something else from the newer 2,000 year old letters, where the discussion of not eating food sacrificed to idols comes up. Irrelevant? No – idol worship with its rituals (both seen and obscene) is where some of those early Jesus followers had come from.

That food, offered to an idol, would snap them back to dark behavior and a hopeless life – In other words, a trigger.

Thus, stronger believers are told to set their freedom aside to help weaker brothers and sisters. Just like my dear ones wouldn’t encourage me to eat an entire pizza in one sitting, or try to get me so emotionally worked up that I have a major mood swing and then plummet afterward, the ones who know me best help me avoid those traps – they lay some of their freedom aside to help their weaker brother.

Hmmm… Seems pretty relevant to me.

The Bible IS relevant, if we’ll take the time and discipline to consider the whole Word, instead of treating it as a buffet and grabbing out the stuff we really like or pointing out the nastiness of the stuff we don’t. Context is a beautiful thing.

Bible believing peeps, don’t be thumping your desktop or doing a fist pump whilst shouting, “Yesssss!” to what I just said. We’re as guilty of doing the snatch and grab thing with scripture.

For example, have you ever really read Jeremiah 29? The whole chapter?

Did you know that the much-beloved verse 11 doesn’t promise relief from a tough situation or trial? It gave hope to Israel that beyond the suffering, beyond the exile, there was a future. The tough stuff was coming, the exile would happen, and things were going to get ugly, but Israel would live on – there was hope and a future in store. It’s not a “get out of suffering free” card, but an assurance that God’s got this. Maybe not in our lifetime, maybe not in the here and now to relieve our suffering, but ultimately?

It’s still a great verse, and a great encouragement. But maybe not quite what we thought it was. Agree? Disagree? How do you read it?

So, what about the whole Gay marriage thing that The Rob was commenting on? Where he declared the 2,000 year old letters culturally irrelevant?

Nope – you’re gonna have to do your own homework on that. I do have an opinion about it, and I have cuddled up with the Word – both Old and New Testaments, well within the framework of context – and I have a position that seems to be in harmony with what I see in the Bible. And there I leave it.

What I do know, in my 55+ years of wandering around this here mudball, is that I’ve yet to find a question or situation in my life that the Bible doesn’t speak to, directly and eloquently.

Sometimes, it’s a number of passages, connected in history or context, or perhaps connected through the overarching story of God in His word, that shed light on Him, His character, His heart, and how much He cares about us.

But you can’t see it that way if you’re just grabbing a piece here, a chunk there, and never see the Word as a whole story. You see, it all connects to show us the Father’s heart.

Sorry, Mr. The Rob, but I calls ’em like I sees ’em. I may be taking your comment out of context, but the fact that you uttered that phrase says that there’s something underneath worth noting and pondering. I may be one of those fools that culture loves to label intolerant, weak-minded, incapable of rational thought, or using a bunch of fairy tales to base my existence upon…

How do YOU read it?