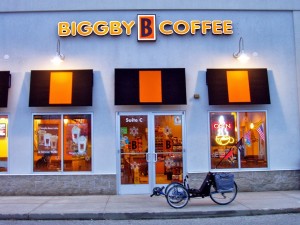 It’s unusual for me to be at my North Office on a Sunday morning. (More properly known as Biggby Coffee on the E Beltline near Celebration Cinema, so the hordes of groupies know where to convene…) Usually my hiney is rockin’ the bass at First Cov, or making an attempt at rockin’, at least as far as this mid-fifties bass boy can rock. Oh, and dancing around a tiny bit, which is just wrong on so many levels, but I can’t seem to stand still, so I just go with it.

It beats the days I had to sit to play, so there ya go.

So, on this Sunday morning I had a week off from worship team, and I decided that instead of going to the service, I’d spend the morning at Biggby, listening to the Bible, doing a little crocheting, but mostly spending time in front of the keyboard, seeing where the Lord and I might go.

I’m an introvert, a people watcher, and an amateur ADD guy, so needless to say my eyes roam around even as I’m typing away. And my brain clicks in and out of focus, as Steve the mental hampster has a field day, running all over the table and pooping with extreme prejudice.

Don’t you SO want to sit down with me at my table, just to take it all in? Of course you do…

So have you ever sat someplace in public, seen someone else, and tried to figure out their story? You’re looking at them, trying not to get caught looking at them, searching for visual clues that will fill in the blanks. With practice, you can get really good at those passing glances that take in a few more details without them actually catching you in the act, lest they make eye contact and let you know in one look that they’re packing pepper spray and aren’t afraid to use it.

This could potentially give the mistaken impression of an old guy, who wasn’t a picture of hotness even in his prime, being creepy and scoping out a young filly, when he has absolutely no business doing such a thing. And really, if he is the sort to engage in such behavior, perhaps he should be humanely neutered at the earliest opportunity.

And if he’s married? Off with his head. No judge, no jury – just cold steel. Or cold, rusty steel. Or, even better – cold, rusty, DULL steel.)

(Can you tell I have issues with middle-aged men acting like idiots, creeping out both young fillies and other gentlebeings as well? Yes, I thought you might have noticed that.)

So, with great stealth and caution, I engaged in this sort of thing this very morning.

Not the creepy stuff – the “observing someone else, trying to ponder their deeper story” stuff. I’m a little shocked you’d even need that explained – you ought to know me better by now. Granted, my sentences usually ramble so much that basically NOBODY can follow my thoughts from one end to the other, but still…

So, the young lady sat down at the next table, right in my line of sight to the window. (Sweet – she’ll just assume I’m looking out the window…)

That was borderline creepy – sorry.

She had her bagel sandwich and beverage, along with a ponderous handbag and an even larger tote bag. I assumed that she was waiting for someone – the seat across from her was empty, and she seemed to be waiting. Charging her phone, checking various and sundry things.

Some sniffling, indicating either a slight cold or some other seasonal issues. Kind of a down expression, looking around, almost seeming a little lost. And so it went for the next 45 minutes or so.

Took a couple of little bites from her sandwich, then threw most of it away.

I kept getting an overwhelming sense of “alone.” She was looking, she was waiting, but she was very much alone. She wasn’t sure what the next step was… a car stalled at a green light.

I’m prepared to be told that this analysis is a whole bucketload of hooey, by the way. I’d be totally NOT shocked to find that I am, as is so often said about my existence, clueless.

But I also felt quite sad for her. As I said, she felt so alone.

I couldn’t engage her in conversation – refer to the aforementioned references to “creepy guy” to understand why, so there wasn’t an opportunity to learn her story, to look into her world, or to try to bring some light into darkness.

Or at least the darkness I was perceiving. Like I said, it could all be hooey too.

So, I simply prayed. I asked the Lord to meet her where she was at, and to bring His light into her world. To speak into her sadness, to invade her loneliness, to bring hope to her since I had to remain silent.

Could I have spoken? Could I have tried to reach out? Was I dodging my job by using the “she’ll think I’m a creepy guy” excuse?

Honestly, I don’t think so. But it made for some great dramatic tension in this little thingie.

Just kidding. I crack meself up, I do I do…

Truthfully, I was trying to keep my heart and ears open, to see if there was a window, an opportunity to speak. There was none – or at least none that I felt or saw. I’ll admit I’m not the sharpest tool in the drawer, so I could easily have missed something, but it seemed to me that all I could do was observe, and then pray.

And sometimes, that’s all we’re asked to do. At times I think we actually do damage, we actually harm instead of help, by pushing into situations where we’re not being given a green light to go.

Sometimes, we just notice, we observe, we watch…

And we pray. Like for the girl at the coffee shop.