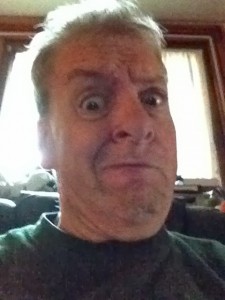 Just for once, I’d like to learn a lesson, and actually not have to return to it. I’d like to have the lesson stick.

But when it comes to lessons, it seems I’ve got a non-stick mental surface that would pass both the egg AND the fried cheese test.

(And if you watched late night infomercials, you’d know that those two tests truly are the greatest challenges anyone can present a given piece of cookware. Ever. Alleluia. Amen.)

So the lesson that seems to refuse to make it past my iron-clad noggin this time is the Lost Puppy Lesson, conveniently linked here by the Proofreader, ’cause she’s fancy like that.

And as we learn in my all-time favorite book, The Phantom Tollbooth by Norton Juster, from my favorite character in that book, Alec Bings (who sees through things), sometimes all we need is perspective – a different point of view. For example, a little perspective can turn the Lost Puppy Lesson into The Cool Kids lesson, giving it not a “happy” ending, but at least a satisfying one.

And that makes all the difference.

(So I guess “I CAN git some… satisfaction…”

The fall fundraiser for the radio station I work at (part-time) has passed into the history books. It’s a few days of intense work, immense blessing, and good stuff in abundance.

But it also teaches me that I’ll never be one of The Cool Kids. And I’m actually beginning to think that I’m actually alright with that.

I work side by side with my friends, many of whom I’ve known for at least two decades, some considerably more than that, and it’s a great time. We laugh, we cry, and we watch together as God again moves His gracious hand. But, it also makes me long for the old days, when I was truly one of them, The Cool Kids, working full-time at the station, a part of the ministry.

And, as far as I can see from here, I’m not supposed to be. What I AM supposed to do, well, I have no clue at this point. But God’s been pretty clear that going back where I was ain’t it. So there’s a distance, a little chasm that I perceive, but I’m guessing no one else does.

I’m always aware of a separation, a distance between myself and others. It’s not intentional, not malicious, and usually isn’t even directed at me with extreme prejudice…

Except for the occasional personage, that is, who decides that I flatline their Weird-O-Meter, causing them to regard me with the Stink Eye of Malice and Loathing, as One Would Deliver to a Wayward Doggie Exhaust Nugget Placed in One’s Sphere of Awareness.

I’m rather an expert on the whole subject of Wayward Doggie Exhaust Nuggets, so I can speak of this with a certain amount of authority.

And I recently received one of those aforementioned Stink Eyes of Malice and Loathing, so my experience is minty-fresh and shiny.

Anyway, I’m used to the subtle separation, the way God tends to keep a little space between me and others. There is, in fact, only one person in my world that I feel no separation from, no distance or “non-belonging,” since God made her especially for me. It’s only been recently that I’ve come to appreciate that in a new, astonishing way.

And lest this become totally self-centered, I’m reminded that God made me especially for her. You have no idea how long it’s taken me to see that – I used to consider our relationship in two ways: God’s great gift, giving me a spouse, a soulmate, and a best friend; and God’s great celestial joke, sticking the Proofreader with a slug like me.

Sorry I called you baby – I’ll try not to do it again, snuggly-lumpkins.

Oh, and family doesn’t count for the whole “separation between me and others” thing. After all, as I’ve heard it said many times, you can pick your friends, but you’re stuck with your family.

Thank goodness. Otherwise I’d have been voted off the island years ago.

In these past few years, as I’m learning this whole thing of being ReBorn and living life 2.0, things like not being one of The Cool Kids take on that change of perspective…

Separation, in my specific and rather odd case, isn’t punishment, but protection. It supplies the space I need to recover from emotional swings and come back to balance.

Isolation isn’t something to drop me into loneliness, but a friend to come alongside and provide a quiet place for my mind to settle.

Embracing my introverted self doesn’t make me a hermit, but instead allows me to truly cherish my times of interaction with others, accepting that it’s alright to make those times the exception, rather than the norm. Too much interaction, too much social stimulation can have some bad results…

For me, that is. I have no idea what it does to the poor souls I’ve inflicted myself upon…

This is all stuff I didn’t know back at the Lost Puppy Lesson, when I was an angst-ridden teenager.

But, like the sunrise on a murky day, I’m beginning to see and accept God’s design – quirks, oddities, weirdness, and all. If it were any less odd, it wouldn’t really fit me, would it?

So, just in time, as life 2.0 is becoming “normal” life, I’m learning just what a remarkable “normal” it is – perfectly designed for me, with help for all my quirks, oddities, and weirdness… I’m not one of The Cool Kids – but I am just what He made me, and I’m ever-so-slowly becoming what He intends me to be…