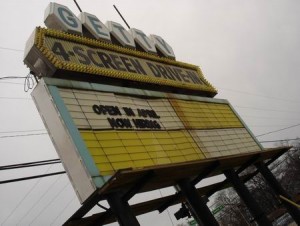 We did a downright spontaneous thing last night. Vicki said she was in the mood for a movie, leaning toward seeing MI3. I, on the other hand, and as might be expected, was thinking more along the lines of Over The Hedge.

So, how about both, featured in a double feature at the Getty 4 Drive-In in Muskegon. Yes – Over The Hedge, followed by MI3, on the same screen. So, we grabbed some pillows, some blankets, some munchies and beverages, and headed off to Muskegon.

But it was WAY fun! We hadn’t been to a drive-in for over 20 years, and it great. Sure – sitting in your car for 5 hours has its issues and challenges, but it was a nice night all the same. Certainly won’t be the last time we go this summer.