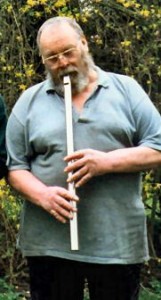 Over the weekend, the whistle world lost one of the great geniuses of all time – Bernard Overton.

Called the Father of the Low Whistle, it was Bernard who really began the production of low whistles, and the whistles he made (as well as Colin Goldie, who learned from Bernard and earned the right to use the Overton name) are regarded as some of the best low whistles in the world.

In my own collection, there is one Bass Bb whistle that Bernard made, as well as a few made by Colin, and they are my “never leave home without them” instruments.

Thank you, Bernard – your work gave people like me a voice to sing with. You will be missed.