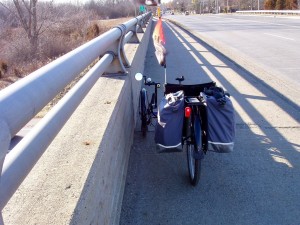 Why is it so stinkin’ hard to get something rolling again after it’s come to a complete stop?

Confession: sometimes that complete stop has come because I just got off and stopped pushing.

Now, because this isn’t the first time I’ve done such a thing, I know full well how hard it will be to get it moving again… Regardless, I got off, I stopped pushing, and I let it come to a complete stop. And I really truly believe that getting it moving again is one of the hardest things that I might ever attempt, if I can bring myself to even try.

“So,” I imagine I hear you ask, “What would you be referring to when you say ‘IT?’ And if Stephen King is involved, I’m outta here…”

If that were true, you’d have to get behind me, ’cause I’d already be at the door. *shudder*

By ‘IT,’ as in the thing that I’ve allowed to come to a grinding halt, I’m actually thinking about a couple of essential things in my existence…

IT = Big Blue, my beloved TerraTrike. I’ve been on it once or twice in the last two months, which is way, w-a-a-y too little. Riding is one of my replacement behaviors for food addiction, so no riding = no replacement for food, thus the possibility that I’ll be using food as a drug again, which would lead toward weight gain.

(I’m up 30 pounds in this past year, so that’s definitely something to be very concerned about.)

IT = Writing regularly. Journaling is my primary tool for figuring out my world, both in living life 2.0 and dealing with the various mental issues I have to work through. When I’m not writing, lots and lots of stuff is getting log-jammed in my noggin, which can lead to a lot of randomness swirling around, muddying mental waters that are already pretty murky.

Things become unclear, thoughts become “grey” instead of black and white, and if left unchecked, no momentum will ever be gained or gotten back, because everything will just slide into the murk.

In other words, two of the most important things to keep my new life at least afloat, if not moving, have come to a dead stop, or a very sluggish crawl.

“Ok, big boy,” I once again imagine someone responding, “Aren’t you being a little overdramatic? Aren’t you getting a little too worked up over a couple little things? Neither writing NOR riding that three wheeled thingie you ride are things that should be that essential to live. They’re just not that big of a deal. Suck it up, buttercup.”

Overdramatic? Milking the moment for all the sympathy I can? Perhaps overreacting a few thousand degrees?

– I still remember spending entire days in my recliner, living there 6-8 hours at a time, placing everything in arm’s reach so I didn’t have to get up from my “nest” to get things. And poor Ezzie the Wonder Dog having to time her outside trips before or after I sat down, since once I was ensconced, it was pretty much over for her until I got up hours later.

– I remember having to watch Vicki go into the grocery store alone, while I sat in the car because my legs simply wouldn’t hold me up for that long.

– I remember the grey curtain covering my thoughts, blurring everything together because I simply didn’t have the strength or the health to push through it.

– I remember desperately stopping at McDonald’s at 3am, getting a huge meal, and having most of it eaten before I drove the two miles home, using the euphoria of food to salve over my churning emotions and my unstable mind, hoping that it would make me happy, at least for a little while.

– I also remember going out in the wee hours of the morning, driving for a couple hours, crying out to God, and along the way stopping at a drive-through. (Since I “needed” something to eat, right?) And after starting to eat, I remember feeling as though a door had slammed shut – my emotions, my thoughts, my heart, they all went dead and numb. One of the first real pictures I got about how food was my drug, my pacifier, my “make-it-all-better-and-keep-the-pain-away” thing. And also throws into sharp relief my struggle with bipolar disorder…

– I remember going from extreme frustration and anger immediately into depression and tears, blaming myself for being so weak and unstable, unable to be the husband my beloved so desperately wanted and needed.

– I remember watching my sweetheart carting a couple hundred pounds of equipment up the basement steps and into the car, then out of the car into a gig, setting it all up while I did what little I could while seated; then she sat waiting for me to toodle my little tunes, and afterward, put most of it away in its cases, hauled it back to the car, and lugged it back down the basement steps. And I remember the loathing that would churn in my mind, knowing that as much as I hated watching her struggle, I didn’t have the strength to help.

– I remember the times where, in my tears and desperation, I would wonder how much better her life would be without me. And I didn’t think God was quite as loving and kind, since He stuck a wonderful woman like her with a slug like me for a husband.

– I remember the months of madness after being laid off of a job that I thought was my calling from God. He hung up on that call – now what do I do? Talk about momentum stopping dead… It was a long time before I could even start to think straight.

Interestingly, the majority of my writing has taken place either on my journey toward surgery, or during the roller coaster ride of the last three years. I don’t know that I’ve ever taken a deep, honest look at what my world was really like back then, before God took away my chains and set me free.

And yet, I’ve got to admit that remembering these and many other scenes from my 480 pound life doesn’t seem to be helping kickstart my momentum. If I think about it for a few seconds, I can remember the darkness, the hopelessness, the despair that I lived in, before my body and mind were ReBorn. But being able to recall those feelings and scenes doesn’t do diddly to bring some leverage into the here and now.

Truthfully, it is SO disappointing to get on my trike and struggle to get in 5 miles, remembering when a 14 mile ride to Conklin and back on the Musketawa Trail was a “normal” ride for me. Or hesitating about loading my stuff into a couple of bags, putting them on the trike and riding to work, 3 miles of up and down, knowing how much of an effort it will be, when there was a time where I wouldn’t have even hesitated – if it wasn’t raining, I was on the trike, period.

Not so much now. We’ve come to a dead stop.

Any writer can tell you the moment of panic, of numb, of lost momentum that hits when staring at a blank page or a blank screen. Real writers develop some things to get over this – routine, habits, little writer’s block-busters to push through and get writing.

Me? I wait for a kick from an imaginary hamster named Steve who spins on a wheel in my mind, until I sit down at a table in front of my keyboard, open the cage, and let him roam around, seeing what patterns emerge from his exhaust.

I didn’t say it’s a good block-buster, but it’s what I got.

(And yes, for the structurally observant among you [although if you are one of them, you probably ditched these random ponderings long ago…], you could say that the Whistler’s Wonderings are pretty much comprised of hamster exhaust.

And that’s why I call it the Fluffy Goodness. You’re welcome.)

Some days, the momentum is rolling, the ideas come, and the fluffy doth flow.

Other days, not so much.

But if a day or days pass between writing sessions, I find an 800 lb. hamster that I get to try and push uphill.

And don’t even get me started about HIS exhaust. *shudder*

So yeah, thinking my way through memories of past frustrations, of momentum gained and lost doesn’t seem to help with any traction to regain momentum.

Or does it? Let’s try turning the camera angles a bit…

So, what if I spend some time remembering the first year, when getting the 1.5 miles from one end of Riverside Park to the other was a difficult undertaking, leaving me gasping. Even now, as out of shape and heavy as I am, I can still go back and forth in the park, covering the three miles with a smile on my face at the end.

Could that give me some traction? Instead of focusing on summer 2011, one of the best years of my life on the trike, perhaps I need to remember summer 2010 – months after the surgery when I was just happy to be moving on three wheels under my own power…

How about even this past summer? The little bit of riding I’ve been able to do is still far, far beyond the summer of 2010. Nowhere near 2011, but is that really important? And way ahead of 2012, where my retail gig pretty much took my whole summer and fall away.

Now I’m not going to pretend – it still hurts like the dickens to get back on the trike and ride. My legs aren’t up to the challenge by any stretch of the imagination.

As for Thing 2, it’s a work in process. After all, it was only after the surgery that we realized how writing (or journaling, since I’m still ambivalent about the whole “I am a real writer” thing…) is an essential part of the process of my new life. As Herself so wisely put it, “It’s where the maintenance gets done.” I’m trying to accept that this is something He wants me to do, even though I think I should be off doing something that actually helps pay the bills.

And so far, the “do both” idea doesn’t seem to work. As I’ve said before, I don’t have a whole train of thought – just a boxcar, and it’s on rusty tracks.

So I’m taking baby steps, trying to learn the craft, hone and fine-tune my voice, and learn what it means to be a writer, just in case I ever get the inclination to actually be one.

Getting easier? Oh my goodness gravy, no.

But every day, even with tiny movement, is worlds away from where I was before March 30, 2010. A bad day today, at 250, is light years away from a day at 480. Clarity, peace, and some measure of balance in my mind is so far from the chaos of depression and bipolar that I lack the words to express it.

So, as we turn the final corner and the ol’ boxcar begins the final descent into a brick wall…

Perhaps momentum isn’t gained in huge increments, but tiny little nudges that keep growing – not in a huge avalanche over a couple of days (although it can certainly do that…), but a little more ground gained, a tiny step here, a misstep there, but not back to square one, never back to square one unless we simply give up altogether.

And it’s measured in years, not moments, because the real lasting change is measured in the long haul, not a sprint.

So here’s another tiny step. Here’s a short ride, or spinning on the trainer in my back yard. Here’s a few words typed in – they might be incoherent, random, and make no sense when read back 24 hours later, but here they are.