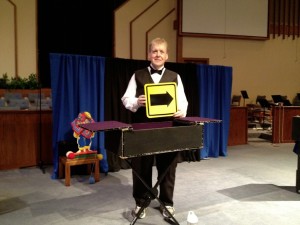 It was a most amazing weekend last October…

Vicki and I traveled down to the Cincinnati area, invited by some dear friends to come and do some storytelling at their church. A fun road trip, some quality time in the car with my sweetie (where we always seem to find time to relax and really talk and just be…), and sweet time reconnecting with Bubba and his beloved.

Yes, his nickname is Bubba. No, his congregation wasn’t aware of that. Yes, they are now. Yes, that snickering sound you hear is me…

(For the record, “gig” is the generic term employed by musicians, performers, etc. It isn’t a commentary on the type of event, the quality of the happening, or anything else – it’s just a fast way to say program, performance, concert, banquet, solemn gathering, assemblage of like-minded folks in a celebratory fashion, etc. “Gig” just rolls off the tongue a little more efficiently…)

As I was saying…

It’s been a while since I’ve done a road gig. What’s the difference between a “road” gig and a “local” gig? Well, packing for one thing – I tend to load anything I might possibly need if we’re going far from home, as opposed to doing Children’s Church 3 miles away where Vicki can fly home and grab the ONE thing I totally forgot to bring, since having Vicki run home 20 minutes before the program is kind of hard when home is over 300 miles away. Or, to misuse the quote from Apollo 13, “Forgetfulness is NOT an option!”

It’s also different in the preparation process. If the Lord would just smack a note onto my suitcase, giving me the list of stories, magic, and other bits and bobs I’m going to need for a particular program, that’d make things MUCH more streamlined. Alas, He’s not inclined to do such a thing, seemingly preferring the “let’s leave Cal twisting in the wind for a couple of weeks, then drop it on him the day before he leaves” method.

I really don’t dig that method.

And, when all is said and done, He takes the stories in a different direction.

In spite of all the stuff I’ve prepared for a 45 minute program.

And we end up not using half the stuff I prepared, packed. brought along and set up.

All the behind-the-scenes angst aside, I made a bit of a discovery that weekend, that then got some confirmation at a totally different gig last night. The discovery is this:

When I’m storytelling, doing a little Gospel magic, or playing music either solo or with a group of friends, I become “real.”

Maybe because in the process of telling stories, I drop all the masks I sometimes hide behind when I’m around others. Putting on a front, keeping up appearances, putting on a happy face – you know the drill. But when I’m telling a story, there’s nothing there but me and the story. It’s as open, as unguarded, as “real” as I can ever be.

I might have noticed this especially this time because I moved from that amazing trip smack into reality in the form of a shift at my day job  – 5am the morning after getting home around 10:30 Sunday night. Talk about a shock – going from being as real as I can ever be to a reduced form of me, scrunched down into the routine, mundane, gruntwork world.

NOTE: Make no mistake – I am VERY thankful for my job, I appreciate those I work for, especially my team leader, and any reference to it being mundane or gruntwork is a reflection of my own distorted perception, NOT anything negative about the place I work or the folks I work with. It’s how I see the world, which is a reality that belongs to me alone…

I realize how much of the real me I’ve lost over the last six months. I try and create, but the words don’t flow, the music doesn’t sing, the art doesn’t come. (Not that I was ever a shining pinnacle of creative output to begin with, except for crochet. I can make hand-crafted hairballs with the best of ’em, complete with fiber-simulated cat hork. My nieces so look forward to their handmade gifts at Christmas…  said none of them, ever.)

Unlike stressful times of the past, though, Cal is not whining, pouting, or otherwise being his formerly spoiled brat self. (Now he’s just a brat, but that’s another issue…)

So, the interesting thing about writing in a journal, (even in electronic form, like I do) is sometimes you put things in one area, (“Ideas To Develop” happens to be the name of this folder – as opposed to the “Crap Hamper,” most of which will never ever see the light of day… we fervently hope…) and they disappear for a while, (kind of like your inbox – somehow you jump from empty to 2,000 messages…) and then for whatever reason one of them catches your attention and you find yourself reading them after some time has passed, (kind of like finding a diary from your teens, only with less hormones and w-a-a-a-y less angst…) and you realize that although they are still true and good observations, the story has moved on.

And so shall you.

Unbeknownst to any of us in the first half of this little thingie, but knownst to me now, and about to be knownst to you, my time at my retail gig ended in December. That weekend in October was the tip of the iceberg, the first indicators we got that although my time there was valuable, was teaching me many lessons, and was providing grocery money (along with a place to spend that grocery money), it was becoming the wrong place for me to stand.

But the truth I realized that weekend is here to stay…

When I am doing what God made me to do, when I am acting in concert with His design and plan, when I am using my gifts that He gave me in the way He wants them used, that’s when I become real.

The most real that I ever am.

And I realize that if my life feels dark, if I feel like everything around me is nothing but mundane, if I don’t see His light shining around me as brightly as it can, well then it’s been way too long since I’ve been real.

Too long since my gifts were used in the way He intended them to be. Or at least too long since I noticed them, realized that they were being used in that way, and didn’t just pass through that time, making it part of the mundane and not mindfully seeing His hand and design.

Now, the day-to-day has to continue. So we do dishes, we take care of stuff, we run errands, we relax with a movie or a book, and we do what life requires and asks and blesses us and stresses us out with. Living as salt and light in the course of normal stuff is what we’re all called to – that’s “life.”

We can’t forget that the day-to-day isn’t necessarily what He designed our gifts for. In addition to the daily grind (for lack of a better term), there are those times and opportunities that allow us to use those special things He’s given us…

And sometimes, those opportunities don’t just drop open in front of us. Sometimes (more frequently than I expected), we have to step out, push doors, look through windows and seek the places where we can bring our gifts into action. We have to ask, to offer, to be open and willing.

You might have a gift (or gifts) that no one knows about. And if you were to sit around waiting for someone to ask you, well, it’ll never happen because they simply don’t know. Granted, there’s a fine line between letting others know about a gift and pushing ourselves into the spotlight, and that fine line can be clearly seen in the attitude of the heart and the illumination of the Holy Spirit.

(I did know someone who always had a few accompaniment tracks with them whenever they visited a church, just in case someone asked them to sing. God bless yer pea-pickin’ heart – if that’s how He tells you to roll, then roll. As for me, not so much. I’m a little more low-key than that.)

(Besides, I’m down with accompanying myself on the piano. Easier, and less stuff to schlep.)

Is it just me? Or do you find those special moments when you’re using your gifts in just the way He made them to be used, and there you are – becoming as real as you ever are or ever can be?

It’s OK to seek those times. It’s alright to look and knock and see if the door is open. Humility fully engaged, servanthood totally active, mindful of not putting ourselves ahead of others, but still seeking to use our gifts and shine…

As for me, I’m sending an email that I should have sent some weeks ago, and getting back on the schedule for Children’s Church. I’ve been asked, they’re aware of my gifts, and they’re excited to have me be involved. I’ve just been dragging my feet.

And, when I realized that family stuff was taking me down Ohio way, I was bold enough to send a message off to Pastor Bubba, to see if there’s an opportunity to stop by and be with their sweet congregation again.

In April, I’ll once again be playing dinner music at WCSG’s Father Daughter Banquet. It’s an honor, a privilege, and a chance to be the real me while watching dads and daughters have an amazing night.

And this Sunday, as I have the joy of doing many Sundays, I’ll be keepin’ me real with my bass in hand with our worship team at First Cov.

So I look for opportunities, and at the same time make sure I’m mindful and thankful for the opportunities that are already right in front of me. Get life done today, and joyfully look forward to the next time He gives me a chance…

To be as real as I’ll ever be. And to see a little glimpse of what eternity might look like – all of us using our gifts, as real as we can be, in His presence.

As the Bard would say in Fiddler On The Roof –

“That would (‘will‘) be the sweetest thing of all.”

Join in the Fluffy Goodness… are there times you find yourself “real” in using your gifts as God designed them to be used? Share, tell, and encourage others. Join the conversation – join the Fluffy…